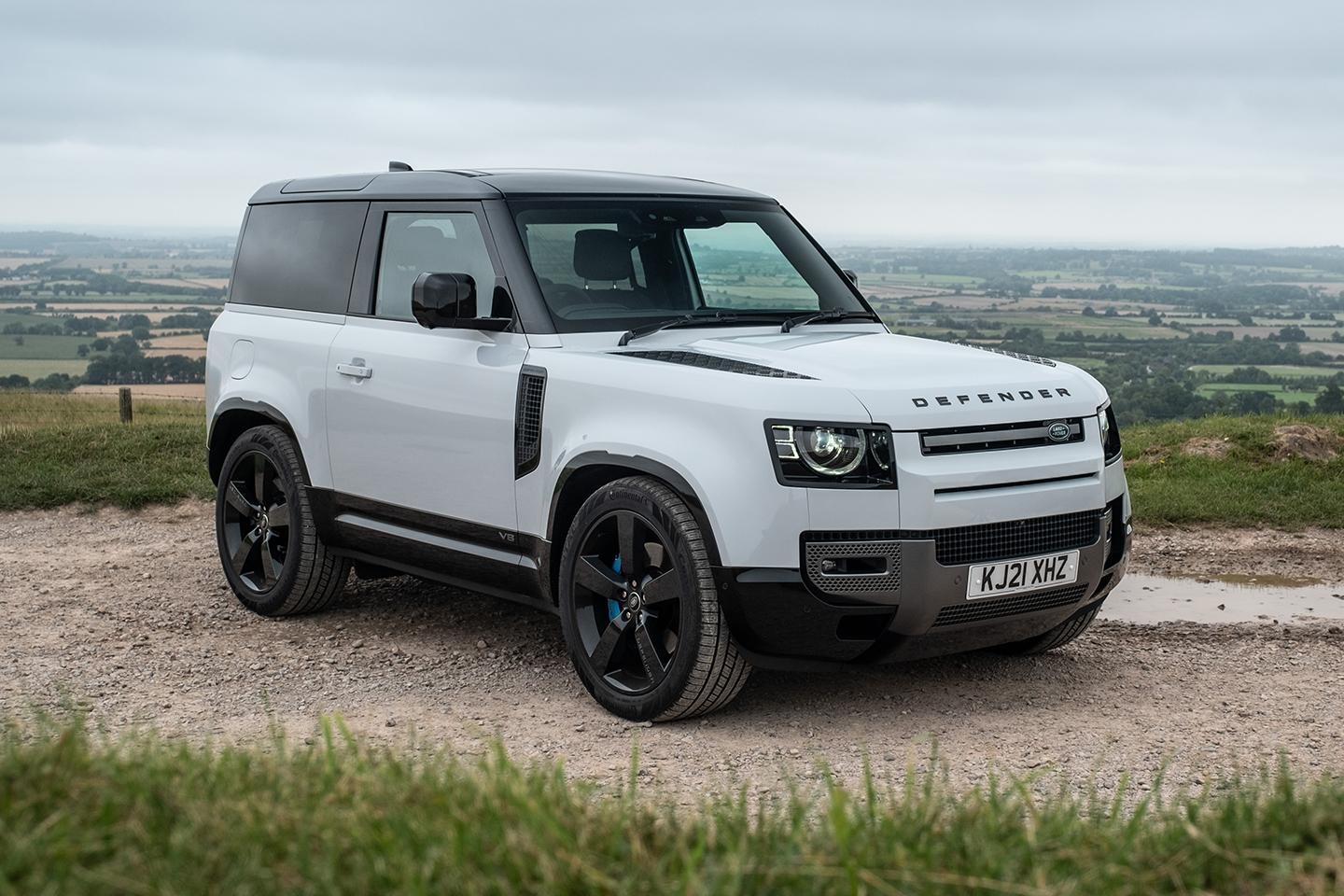 All I really want to tell you about the Land Rover Defender V8 is that it goes like stink, makes a terrific noise and looks tough as hell doing it. There aren’t too many completely daft new cars in circulation these days and those that do remain, as we know, won’t be around a great deal longer. So if you want a rocketship Defender and don’t mind the asking price, I won’t be the one to steer you away.

But apparently I have to be a little more objective than that. Eyed through the unforgiving lens of a magnifying glass, the Defender V8 is a flawed machine, even among the very noisy and conspicuously consumptive ranks of this sort of vehicle – the very high-performance off-roader, perhaps the most inherently compromised type of car ever conceived.

Available in either three-door 90 or five-door 110 guise, this new V8 model is the fastest and most powerful Defender yet, and by an enormous margin. It uses the familiar 5.0-litre supercharged engine that’s made countless other Land Rovers and Jaguars thunder along at frightening speed while sounding like the arrival of the apocalypse. It is a venerable old brute, shot through with character and charm.

Here it develops 525hp and 461lb ft of torque. Even the shorter wheelbase model weighs more than 2,500kg with a driver, which explains why even with all that shove and four-wheel drive, the Defender V8 still needs just over five seconds to crack 62mph. It tops out at 149mph, where the physics of forcing an enormous house brick through the air eventually wins the fight against internal combustion.

The 22-inch wheels look vast even in the Defender’s cavernous arches and while you’ll each have your own view on how it looks, I must admit to being a fan. The 90’s stumpy proportions have always seemed so appealing to me, all the more so here for having such big wheels at each corner and four pipes poking out the back. Others will think it cartoonish and silly, and I will agree that this car’s bright blue brake calipers – but only on the front axle – do look a bit out of place.

The trouble with giving a car like this the power of a super saloon is that it must be able to cope with it. Or rather, it must be able to cope with being driven as quickly as 525hp will make it go. To that end, Land Rover’s chassis engineers have tweaked the air springs (effectively adding spring rate) and fitted whacking great anti-roll bars to keep it from toppling over mid corner.

The tyres are Continental CrossContacts, which almost look like conventional ultra-high-performance tyres but with extra sipes in the tread blocks. Crucially the Defender V8 will still go off-road (Land Rover assures us this range-topping model is “as rewarding on the road as it is capable off it”) but some of the standard car’s rough terrain prowess will have inevitably been lost in the pursuit of better road holding on the highway.

That is the fundamental compromise at the heart of this sort of car. And it applies to every one of them, from Mercedes-AMGs to BMW Ms and supercharged Land Rovers. They are designed from the ground up to do one thing, then adapted to do the exact opposite. Heavy as they are and riding high the way they do, off-roaders just aren’t well suited to being driven very quickly along a road. By giving them that capability, you take away the very thing they were designed to do in the first instance. It’s unavoidable.

There probably won’t be a single Defender V8 buyer who’ll mourn the lost off-roading capability, however great or small that loss may be. But might those stiffer springs and tauter anti-roll bars erode too much of the basic car’s everyday refinement and ride comfort? That’s a far more pertinent concern.

Sat high up in the Defender’s cabin but somehow not feeling perched atop the car, you peer down onto the road and other road users below like an emperor upon a throne. This interior is a curious mix of the ultra-sophisticated, like the two shimmering digital displays, and the faux-utilitarian. Do all those exposed screw heads qualify as functional given we know they’ve been very consciously designed in? I do love a steering wheel covered in man-made suede, but here it just seems unnecessary. Still, you can’t argue with the material quality or the level of fit and finish throughout.

Unlike other Defenders, this one has a Dynamic driving mode. It reconfigures the throttle calibration and damper tuning to sharpen the car’s responses, while there are stiffer suspension bushes to improve steering and handling precision. Unique to this model is an electronically controlled active differential in the rear axle, which works with the torque vectoring by braking system to make the Defender V8 corner with a little more enthusiasm.

And from the behind wheel? You feel precise and accurate steering, which may be totally devoid of feel but is intuitive enough to allow you to really barrel along at speed and with confidence. I noticed the same thing in the mid-range Defender 110 I drove a while back, but here there is more precision still. In corners the car feels keenly balanced, not simply wanting to plough on with irresistible understeer. But despite its new anti-roll bars, the Defender V8 still leans heavily onto its outer edge the instant you pitch it into a turn. You get a fright the first time, thinking it might roll so far it’ll fall over. But of course it never does, and so that body roll perversely becomes part of the fun.

The engine is as monstrous here as it ever was. Throttle response is razor sharp and it pulls hard even against all that weight. I’m not sure I’ve heard it make this complex a sound before. The deep V8 rumble is still there, but in this application, it’s overlaid with a high-pitched whine from the supercharger. I liked it a lot. And I liked the eight-speed automatic gearbox too, which is faultlessly smooth in normal use, then surprisingly responsive when you take control yourself using the paddles.

Inevitably, some ride comfort has been lost, and not only in Dynamic mode. Over uneven stretches of asphalt, the Defender V8 does jiggle and jolt you around, though it’s not ruinous. A bigger issue for me is one of cost – you’ll get change from £100,000, but only if you leave the options sheet unmarked.

I suppose the biggest issue for me is this: the V8 might be the fastest and most expensive Defender 90, but by no means is it the best. While there have been V8-powered Defenders before, this is the first that’s been billed as a true performance car. I think, in that respect, it has overreached. Though I get a primal kick out of unleashing 525hp in such a high and heavy 4×4, I do wonder if this car would be more comfortable in its own skin without a supercharger, with around 400hp and no sporting pretensions whatsoever. And maybe a less eye-watering price tag, too.

But like I said 1,200 words ago, the Land Rover Defender V8 goes like stink, makes a terrific noise and looks tough as hell doing it. Don’t let me stop you.

How did AstraZeneca lose the vaccine race? – Telegraph.co.uk