The Hyperscreen is controlled by the latest generation of MBUX – an operating system that supports touch and conversational speech input as standard as well as over-the-air software capability that will allow owners to update various features, including a larger steering angle of 10.0deg for the EQS’s rear-wheel steer system, which gives a claimed 10.9m turning circle, together with subscriptions, temporary feature activations and what Mercedes calls “free software test phases”.

A high-set centre console divides the front seats, while a near-flat floor helps to liberate greater rear-seat accommodation than that of the S-Class. 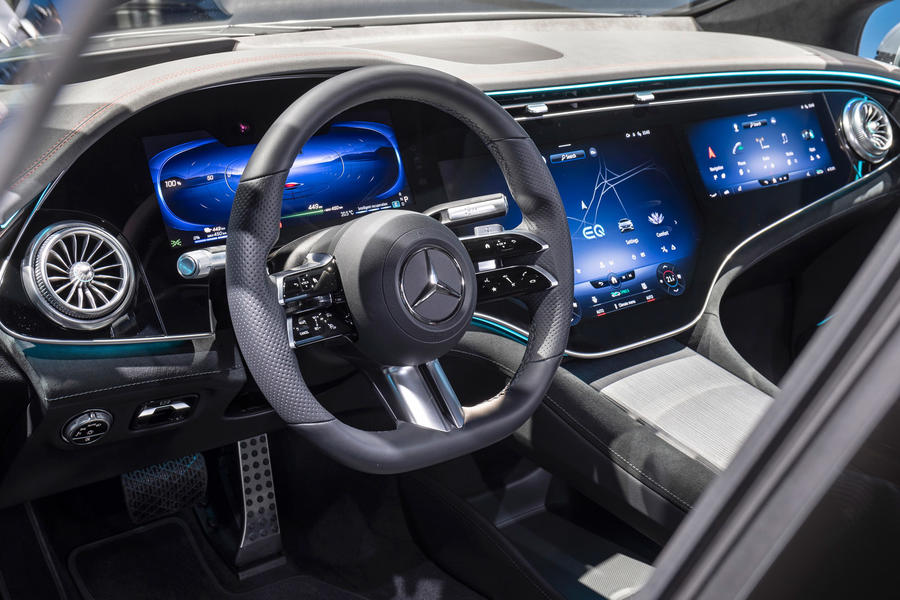 Although the EQS does without a front storage compartment like many rivals, its claimed 610 litres of boot space is 60 litres more than that offered by the S-Class and it extends to 1770 litres when the split folding rear seats are stowed.

In the rear-wheel-drive EQS 450, a rear-mounted asynchronous electric motor delivers 329bhp and 338lb ft of torque, while the initial range-topping EQS 580 – which will not be sold in the UK – puts a motor on each axle for a combined 516bhp and 631lb ft.

Both cars get a 107.8kWh (net) lithium ion battery, with energy content described as being up to 26% higher than that used by the EQC and an official range of up to 453 miles on the WLTP test cycle.