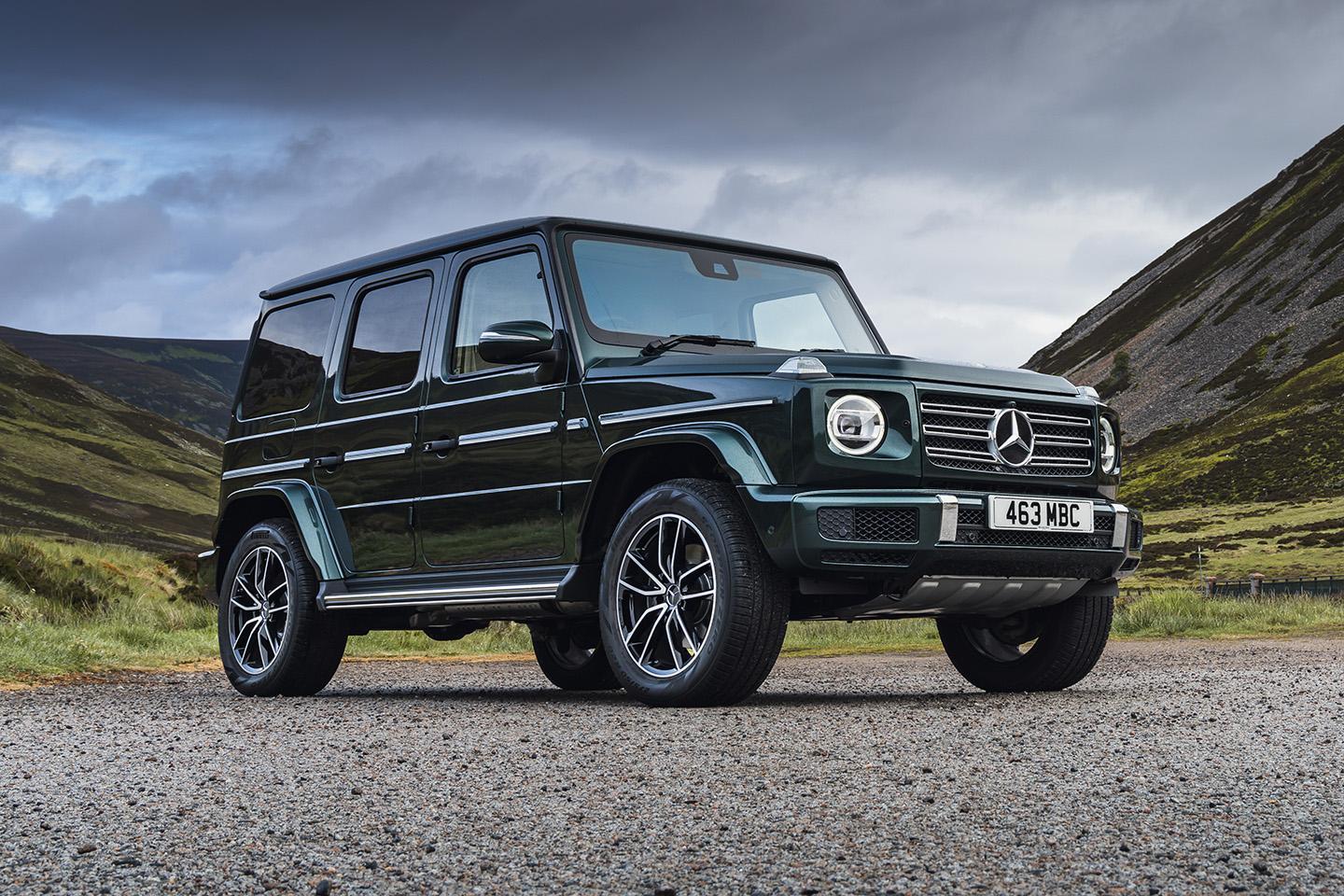 Probably it says something about the world and 2021 that the Mercedes G-Class was a welcome visitor to PH last week. Even in its modernised format, the model has played up to its Eubank-like persona in a mostly homogenised SUV market, and, if anything, the arrival of the diesel-powered G400d in the UK only amplifies its against-the-grain status. From September the model effectively replaced the G350d available from launch with a beefier variant of the 3.0-litre six-cylinder unit. And in the G-Class, beefier is generally considered better.

Driven amid a fuel crisis, in the month following record-breaking EV sales, the oil-burning G-wagen oozes oddball charisma. Run a tape measure round it and the dimensions wouldn’t be substantially larger than any other big, prestige-badged SUV – and yet it seems huge. It hardly matters whether you think the G-Class cannily updated or terminally kitsch; it takes a bicycle pump to your ego either way. No car better resembles a child’s fort or more successfully evokes the feeling of sitting in one.

It is so wantonly silly that choosing the much more famous V8-powered G63 iteration has always been a justifiable decision (what’s one more log on the firestorm?) but, truth be told, the inline oil burner is a much better fit for what’s going on beneath the carpet. This goes double for the G400d, which levers an additional 44hp into the equation over the G350d, not to mention 73lb ft of torque – giving you 516lb ft from 1,200rpm. This is ample. You’ll have to do without the involuntary chuckle that comes with the G63’s gratuitous thrust, but the six-pot’s mid-range is easily burly enough to make the diesel G-Class seem like it’s getting a major hurry on.

Obviously it helps that your accelerative expectations are more modest than they would be in, say, a Range Rover Velar. Light years ahead of its lumbering predecessor the current G-wagen may very well be, but it doesn’t overly concern itself with the business of concealing two and a half tonnes of very high-riding kerbweight. Similarly, the body-on-frame architecture, coil springs and rigid rear axle regard knife-edge dynamism with obvious disdain, and get on with doing things in their own unhurried fashion. Getting to 62mph in 6.4 seconds is plenty quick enough.

Once there, it is unlikely that you will seek to go much faster. Not on a B-road at any rate. The G400d is capable of it, no doubt – but it settles into the national limit so conveniently, and brushes off intrusions so agreeably, that you’ll probably just settle for going with the flow. There is a ‘Dynamic’ drive setting if you really must, but the adaptive dampers and electromechanical steering are shrewdly judged in ‘Comfort’, delivering just the kind of progressive, head-lulling handling you’d expect from a plush off-roader built the old-fashioned way.

The three buttons on the dash, one apiece for the locking diffs, are the ones which deserve pushing in the G-Class. Sadly we didn’t get a chance this time round – although previous experience of the car’s obstacle conquering ability suggest there’s not much in an autumnal south east that would faze it. No reason to not think the new diesel unit a very willing partner either; its all-round drivability certainly includes the sort of willing throttle response you’d want in a dedicated 4×4, and there’s always low range to call on if the going gets really tough.

Not that G-Class buyers are typically found anywhere near the nation’s byways. Conspicuously high cost has always seen to that, and the £115,995 asking price for the AMG Line Premium Plus we drove is unlikely to encourage anyone into the unknown depths of a muddy puddle. For all its mechanical prowess, Mercedes doesn’t much encourage it either: inside the G400d might be missing the very latest infotainment tech, yet is still trimmed with S-Class finesse. Not so many months ago, a well-known PH rival named the G-Class the best luxury car of 2021. It isn’t. But you can see where they were coming from.

Don’t think about it too hard though, otherwise you might start to ask yourself what precisely is the point of the modern G-wagen – and for all its longevity and past-life military vehicle kudos, there’s no hard kernel of truth there, just the usual murky, build-it-and-they-will-come market reasoning. I for one am glad they still do; the current Land Rover Defender is better, cleverer update of an icon, yet its departure for mainstream pastures means it is the G-Class which now populates a one-make niche, and it does it with considerable charm.

Doubtless most buyers will still err towards the superior pomp of the V8 (and PH would dissuade no-one from owning that turbocharged 4.0-litre engine in any stripe), but I’d encourage any fence-sitters to reassess what precisely they have planned for their new car. If it’s strictly showing off within the congestion charge zone, then plainly the G63 is custom-built for the job. But if it actually needs to be a fully-functioning SUV in what passes for the real world, the G400d is the superior G-wagen.

Crypto investors like Terraform Labs so much, they’re committing $150 million to its ‘ecosystem’

NONE of the 30 ministers who attend Cabinet have had £10,000 heat pumps installed at their homes – Daily Mail