So, rather than taking an existing design and making compromises in one area or another to make the frame, suspension and motor work together, Yeti designed the 160E from the ground up. 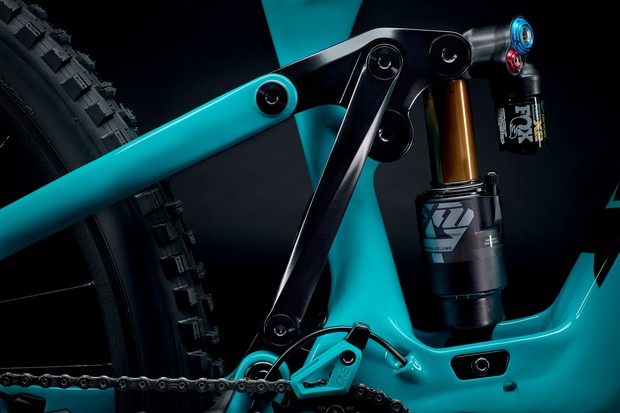 The Sixfinity design has 160mm of rear-wheel travel and features rider-adjustable progression rates thanks to lower shock mount chips.

Built from carbon fibre, like the rest of Yeti’s MTB range, the 160E’s frame has been designed around 29in wheels and has a host of neat features you’d expect to see on this type of bicycle exotica.

The frame is rated to Yeti’s DH strength standards but has a 130kg system (rider and bike combined) weight limit. 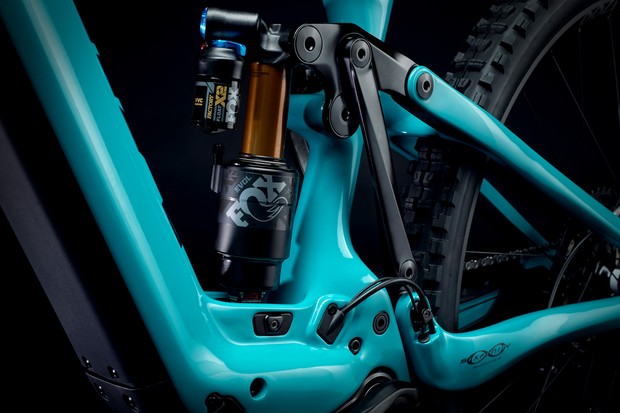 Internally routed cables, plenty of dropper post insertion depth, plus other touches, should make the 160E feel as premium as its asking price.
Yeti Cycles

The internally routed cables – spanning from front to back – feature a tube-in-tube design to make routing quick and easy through the swingarm. The cables are hidden in the down tube behind the battery, with clips keeping everything in place.

The cable ports should help to eliminate internal cable rattle and are configurable according to the brake and gear setup.

It has a 31.6in seat tube diameter, while the seat tube’s length is straight and uninterrupted to the bottom bracket to allow for more dropper post insertion and longer travel posts. 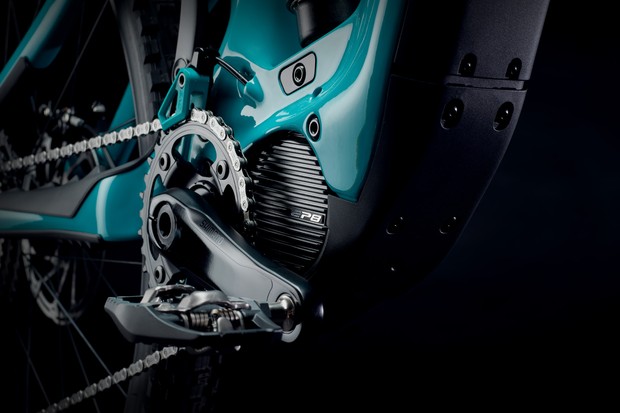 Unsurprisingly, it has space for a water bottle inside the front triangle, but the small size requires a lower-volume bottle to fit. 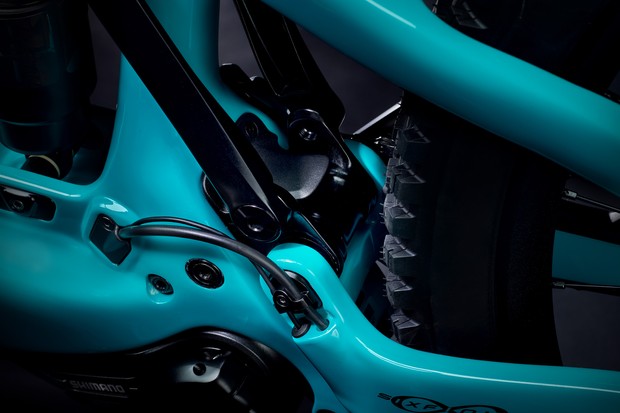 The suspension’s linkage first rotates up, then down as the bike compresses through its travel. This has allowed Yeti to tune the kinematics.
Yeti Cycles

Yeti’s first ebike moves the brand away from its Switch Infinity link design to a six-bar linkage design. The results of the new system’s design are almost the same, though – where anti-squat, leverage ratio and anti-rise are controlled during compression (either via the Switch Infinity link or lower link on the new Sixfinity design), which works by moving up as the suspension compresses and then down.

Yeti says that not only did the new Sixfinity design create the necessary suspension kinematics for an ebike, but it also meant the chassis could be built strong and stiff enough to handle the additional forces of weight and speed associated with ebikes.

Yeti claims the Sixfinity link’s switch in the rotational direction (known as the inflection point) from up to down, allows it to tune the suspension’s anti-squat value so it remains almost entirely constant at around 100 per cent across the bike’s range of gears as it cycles through up to the first 90mm of its travel.

It dubs this portion of the travel the ‘pedalling zone’ and says that if anti-squat is set to around 100 per cent in this area, the bike’s suspension will resist pedalling forces – neither extending nor compressing under power – creating a stable yet traction-rich ride.

Anti-squat is how much the bike’s suspension resists compression or causes extension while pedalling. 100 per cent anti-squat means the suspension should neither compress nor extend.

Yeti’s Sixfinity link also tunes the anti-rise. In the 160E’s case, Yeti wanted the figure to remain as constant as possible throughout the bike’s travel to help maintain its geometry.

At between 58 per cent at full extension, 65 per cent at sag and 61 per cent at bottom-out, the 160E’s rear suspension is more likely to extend slightly under braking.

Yeti claims aiming for this figure balances traction and the preservation of geometry when braking.

Adjusting the rate of progression

Thanks to the lower shock mount, Yeti has made it possible to adjust how progressive the 160E’s rear suspension is.

This level of in-built progression makes the 160E well suited to coil-sprung shocks – because the spring is linear in nature – but can also work with high-volume air shocks with no volume reducer spacers (that create a progressive spring rate).

Each of these progression settings alters the travel minimally (from 159mm to 163mm) and doesn’t affect anti-squat or anti-rise. 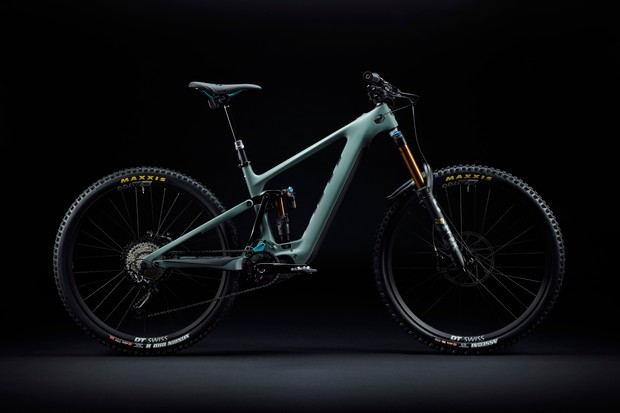 Yeti says the six-bar suspension design has allowed it to use a 29in back wheel and keep the chainstays from being too long.
Yeti Cycles

Yeti says the 160E has been developed as a race bike, so is designed for speed. Therefore, it not only needs to perform well with the motor engaged, but it also needs to ride well once the motor cut-off speed has been exceeded.

To do this, its geometry has been created to meet the demands of the Yeti race team, including EWS riders Jared Graves and Richie Rude, who provided plenty of feedback.

Although the bike’s suspension is adjustable, its geometry is not; it has one fixed position. The 160E is offered in four sizes, from small to extra-large, designed for people from 155cm to 200cm in height.

Headline figures include a 64.5-degree head tube angle, a 78-degree effective seat-tube angle (measured with the seatpost set to the same height as the top of the top tube), 446mm chainstays across all sizes and a 350mm bottom bracket height.

Reach figures start at 430mm for the small and extend to 505mm for the extra-large.

Of course, I’m reserving judgement until I’ve ridden one in anger, and I’ll happily and willingly concede the Yeti enduro race team are far more experienced riders than I am, so must know what works and what doesn’t. 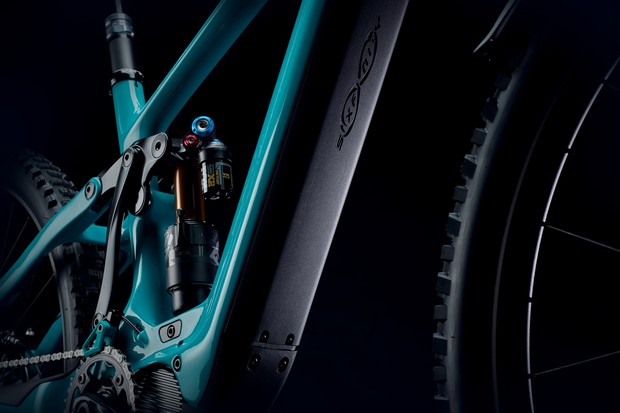 The Shimano 630Wh battery is concealed in the down tube.
Yeti Cycles

Yeti has chosen to partner with Shimano for the 160E’s motor and battery.

The brand’s EP8 motor and 630Wh battery are fitted to all 160E models, along with the slimline EM-800 mode switch and EM-800 full-colour handlebar-mounted display.

The on/off button sits on the top of the top tube, just behind the stem, while the charging port, like many ebikes, is positioned on the non-driveside.

The Yeti 160E has been designed to be an electric enduro race bike.
Yeti Cycles

They also share Yeti’s brand-new thermoplastic ebike handlebar with in-built cable routing for controllers and displays. The brand claims it has the same damped characteristics as an alloy bar but with the stiffness to weight ratio of a carbon bar. 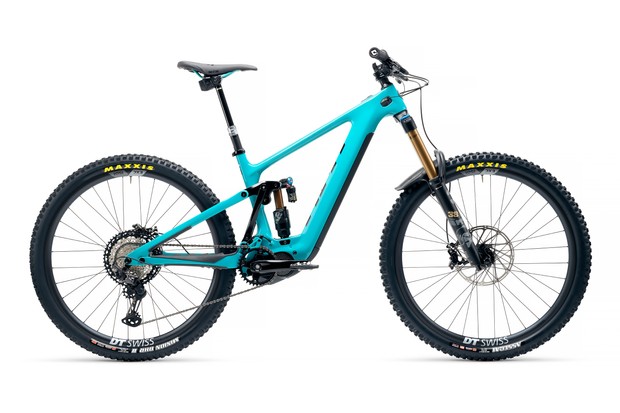 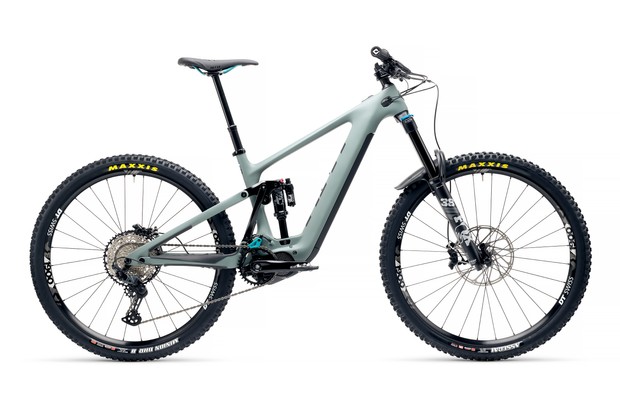