By Alex Lawson and Glen Owen for The Mail on Sunday

Chinese investment in Britain’s next generation of nuclear power stations is set to be banned on security grounds, leaving a multi-billion pound funding hole in the plans.

Nuclear power is key to Government plans to ‘future-proof’ the country’s energy supplies and avoid further price shocks, and is part of a drive towards a so-called ‘Green industrial revolution’.

But The Mail on Sunday understands that Ministers are going to formally bar any further involvement by China’s General Nuclear Power Group (CGN) in the £20 billion Sizewell C nuclear power project in a move likely to set a precedent for future collaborations.

It is understood the Treasury is examining plans to use pension funds to plug the funding gap for Sizewell C, which is 80 per cent owned by France’s EDF. 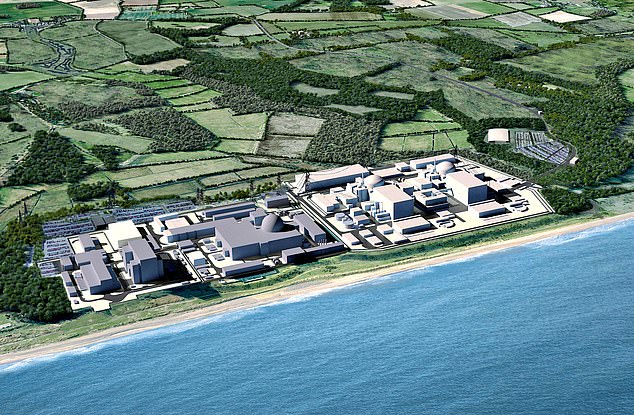 ‘Future proofing’: A computerised view of the proposed nuclear power plant at Sizewell in Suffolk, where it is understood that Ministers are going to formally bar any further involvement by China’s General Nuclear Power Group (CGN)

Energy experts say the current crisis has been caused, in part, by unusually light winds which has reduced the output from wind farms and underlines why the UK must build nuclear plants to provide a reliable source of clean energy.

The Government has committed to making a final investment decision on at least one large nuclear project during this parliament.

Officials are understood to be keen to publish a decision on the future of Sizewell C ahead of next month’s spending review and the UN climate change conference in Glasgow in November.

A senior industry source said: ‘The Chinese will not be involved at Sizewell. This is part of a long journey and is politically much bigger than just one plant.’

Exactly how the Chinese will be frozen out of Sizewell, on the Suffolk coast, is unclear.

They have a 20 per cent stake in development of the project and an option to remain once it is built.

CGN is also involved at Bradwell in Essex, where progress is understood to have stalled, and in the EDF-led Hinkley Point in Somerset, due to be completed in 2026.

Treasury officials have studied several options to replace China’s funds at the plant.

Sources said the favoured option is a regulated asset base (RAB) model, which has been used in other big infrastructure projects such as the Thames Tideway and requires legislation. 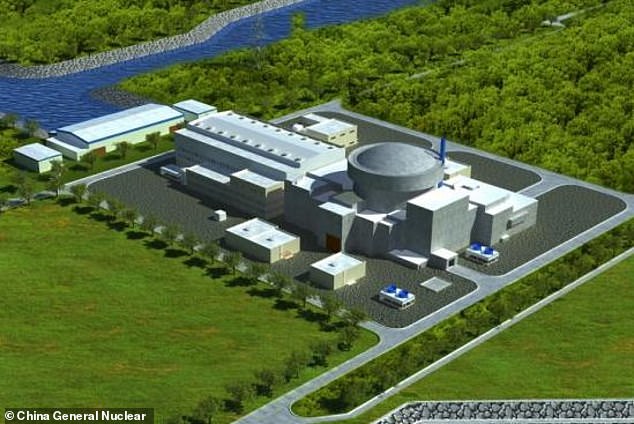 CGN is also involved at Bradwell in Essex (computerised image seen above), where progress is understood to have stalled 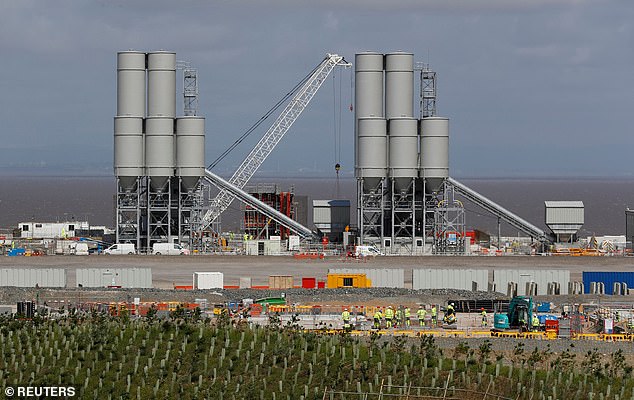 It is also involved in the EDF-led Hinkley Point in Somerset (workers pictured at the site above, in 2016), due to be completed in 2026

Last week, it emerged that Ministers are in talks with the US nuclear reactor manufacturer Westinghouse over a proposal to build a new plant in Anglesey, North Wales.

Separate proposals have been mooted for a series of small modular reactors (SMRs) to complement larger plants, including a programme led by Rolls-Royce.

A Government spokeswoman said: ‘CGN is currently a shareholder in Sizewell C up until the point of the Government’s final investment decision. Negotiations are ongoing and no final decision has been taken.’