Downing Street is on the brink of a U-turn which will allow overseas HGV drivers to plug the gaps causing emergency shortages, Sky News understands.

Ministers met earlier for urgent talks on how to address the shortage, which one industry body estimated at more than 100,000 drivers.

No 10 said it is looking at “temporary measures to avoid any immediate problems”, without elaborating on what will be done.

However, Sky’s deputy political editor Sam Coates reports that Prime Minister Boris Johnson has cleared the way to allow a visa change to prevent a crisis which could disrupt significant, critical areas of the economy.

The change will allow thousands of lorry drivers and potentially people involved in the food industry who live overseas to swiftly get visas.

The details are set to be revealed on Sunday in a bid to overshadow the start of Labour’s party conference.

This marks a big change in approach. Previously the government has focused on handing visas to high skilled individuals in the hope that labour shortages would drive up wages to make professions more attractive to people who already live in the UK.

However, the short term consequence of this has proved too disruptive for the heavy goods industry which is why ministers have been forced to act.

The cabinet has been given dire warnings of the consequences of a failure to act and the situation worsening, impacting everything from food distribution to the NHS to delivery of water purification chemicals.

A Downing Street spokesperson said: “We have ample fuel stocks in this country and the public should be reassured there are no shortages.

“But like countries around the world we are suffering from a temporary COVID related shortage of drivers needed to move supplies around the country.

“We’re looking at temporary measures to avoid any immediate problems, but any measures we introduce will be very strictly time limited.

“We are moving to a high wage, high skilled economy and businesses will need to adapt with more investment in recruitment and training to provide long-term resilience.”

Retailers have warned the government has just 10 days to save Christmas from “significant disruption” due to the shortage.

The British Retail Consortium (BRC) has warned that disruption to festive preparations will be “inevitable” if progress is not made.

Sky’s political correspondent Tamara Cohen reported earlier that ministers were split on whether or not to offer temporary visas to try and tackle the shortage of HGV drivers.

Meanwhile, Sky News understands that government departments are being asked to come up with emergency contingency plans in case high fuel prices persist.

Other measures being suggested are that the military could help qualify people to become HGV drivers to reduce waiting times to pass the test.

But, at present, there is no request for the military to provide fuel lorry drivers themselves, a defence source told Sky News.

Cabinet are split on visas, with George Eustice and Steve Barclay pushing for.

I understand solution could involve something similar to Seasonal Workers Scheme to avert immediate pressure.

Troops with HGV qualifications have the capability to test would-be civilian drivers to enable them to gain the right qualifications to drive HGV lorries, according to the source.

On Friday afternoon, BP said that between 50 and 100 stations have been affected by the loss of at least one grade of fuel, with around 20 of its 1,200 sites currently closed through loss of delivery supply.

Shell reported an “increased demand” at stations, with many drivers experiencing longer queues than normal.

Tesco said two of its 500 petrol stations were affected – describing the impact as minimal.

Sainsbury’s, Asda and Morrisons said they were not affected.

The AA has said that most of the UK’s forecourts are working as they should, with president Edmund King saying: “There is no shortage of fuel and thousands of forecourts are operating normally with just a few suffering temporary supply chain problems.” 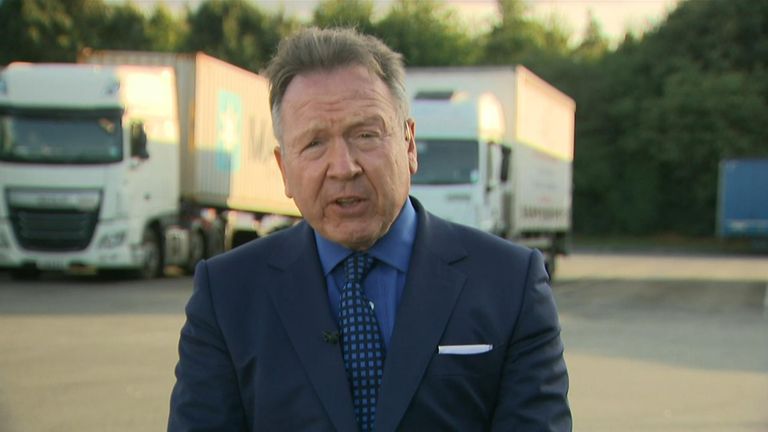 Speaking to Kay Burley, Transport Secretary Grant Shapps said the shortage of drivers should “smooth out fairly quickly” as more HGV driving tests have been made available.

“The problem is not new,” the transport secretary insisted, adding: “There has been a lack of drivers for many months through this pandemic because during the lockdown drivers couldn’t be passed through their lorry HGV tests, and that is what has led to this problem.”

The latest ONS Labour Force Survey found that 14,000 EU lorry drivers left the UK in the year to June 2020.

Transgender woman sues Sainsburys after worker said look at state of that – Metro.co.uk