The Government’s furlough scheme is set to end tomorrow after 19 months.

Latest figures from July showed 1.6million jobs still being propped up by the scheme, which has been running since March last year.

From tomorrow, pandemic support measures including furlough and the extra £20-a-week in Universal Credit for struggling households, will end.

The furlough programme, which at its peak paid a third of employees to stay at home, cost more than £68billion – the most expensive single piece of UK economic support during the pandemic.

Numbers had dipped by 340,000 by the end of July – the first month that employers had to pay 10 per cent of the salaries of their furloughed workers.

Earlier this month, experts warned that only a ‘trickle’ of staff were being taken off furlough and a million could still be reliant on the bailout when it comes to an end.

HM Revenue & Customs figures showed 121,600 people between the ages of 18 and 34 were taken off the furlough scheme in June and July.

Furlough levels remained the higher in London on July 31 than in other parts of the country, especially for men.

Concerns are now being raised about the number of workers over the age of 50 who are still furloughed.

More than 540,000 people in the age group were on furlough at the end of July, accounting for 35 per cent of the total, according to research.

Rest Less, which offers help and advice for older people, said the pandemic had ‘devastated’ the job market for older workers over the past two years.

Founder Stuart Lewis said the full impact might still to be felt, adding: ‘With more than half a million people aged 50 or older still on furlough at the last count, we may well see hundreds of thousands of hardworking, experienced older workers enter redundancy and, ultimately, find themselves looking for a new job in the run-up to Christmas.

‘The jobs market is polarised at the moment. On the one hand, we have record job vacancies and companies struggling to hire talent in key areas, for example HGV drivers and healthcare.

‘On the other side, unemployment levels across many age groups have yet to recover and we are seeing huge falls in economic activity amongst midlifers.

‘Much more can be done to help bridge these gaps through intensive retraining and accelerated assessment programmes.’

Rest Less said its research suggested long-term trends of employment growth among the over-50s has been reversed over the past two years. 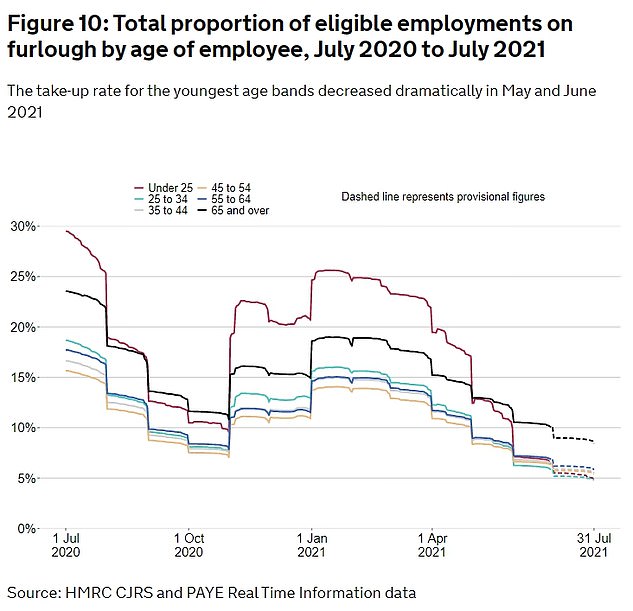 Stuart Lewis added: ‘The loss of any large proportion of society from the workforce is cause for significant concern and risks holding back the economic recovery for all.

‘Whilst for some workers aged 50 and older economic inactivity is a choice and a planned exit from the workforce, many others are finding themselves faced with an early retirement they are neither financially or emotionally prepared for.’

A Government spokesperson said: ‘Our £400 billion Plan for Jobs is working – nearly two million fewer people are now expected to be out of work than was previously feared.

‘Furlough was the right thing to do to protect almost 12 million jobs when Covid was at its peak but now restrictions have eased, people are returning to work and the scheme is naturally winding down, with 194,000 more people aged 50-64 on payrolls compared to a year ago.

‘We’re doubling down on our plan as the economy rebounds – refocusing our support on giving people of all ages the skills and opportunities they need to get back into work, progress and earn more, including older workers through our 50 Plus: Choices offer.’

Emily Andrews, of the Centre for Ageing Better, said: ‘Throughout the pandemic, over-50s have been hit hard by redundancies, and it’s likely that the end of the furlough scheme will be no exception.

‘Job losses for this group are particularly worrying, as we know that they are more likely to struggle to get back into work. In the past, back-to-work support simply hasn’t worked for the over-50s.

‘That means we now need to see an intensive programme of support for older workers to get back into work, including support to retrain and reskill.’

Charlotte Daniel, 28, has started learning Spanish and launched a business with her partner while on furlough

Charlotte Daniel spent the majority of the past 18 months on furlough, and says it has been a mixture of emotions.

The 28-year-old data analyst described feeling ’emptiness, lack of purpose, loneliness’ and a ‘desire for progression’.

‘A year-and-a-half without career development at my age is hard,’ she told the Guardian.

Ms Daniel, from Canterbury, returned to work when she was offered a secondment but said it was a ‘massive shock to the system’ – particularly as she had to work 12 hours per day at home with ‘terrible wifi’.

She said she chose to go back on furlough – during which time she has picked up Spanish and bikini bodybuilding, which she now trains for five times a week.

Her and her partner have also managed to launch a sportswear brand for women and bought their first house together.

She added: ‘It’s been a mad 18 months but I’ve made the most of being furloughed.

‘Now I’m really looking forward to going back to my role next month and seeing my colleagues.’

Peter has been furloughed for 18 months and says he has had nothing to do since his job entails putting on concerts.

The 39-year-old said he has been lucky as the Royal Northern College of Music in Manchester has been topping up his wages during that time.

He said: ‘But my mental health suffered significantly, I was under the constant stress of thinking my job could be discontinued at any moment…

‘The only saving grace for me was that my first child was born at the beginning of the year.

‘I’ve bonded with him far more than if I’d only seen him at bedtime, and my partner and I have shared childcare. For that, I’ve been incredibly fortunate.’

Peter returned to his full time job this month with a hybrid deal of working from home and at the office – and with concerts scheduled for the autumn, things are looking up.

For John Cooper, 45, who was furloughed in March 2020, the experience has been an ‘eye-opener’ and taught him the value of family.

He took up a second job stacking supermarket shelves from 9pm to 1am, three times a week.

‘It was a godsend for my mental health,’ he said, ‘With the 80% salary from my normal job, it meant we were slightly better off in terms of household income.’

The operations manager was able to take up golf again after 20 years and he and his family moved out of town.

He added: ‘I play golf four or five times a week, I’ve made new friends and I’ve lost weight. I’m now free of debt for the first time in my life.

‘The pace of life has slowed down, and I’ve realised you don’t have to be chasing things and doing things all the time.’

He has agreed to return to his original job on a part-time basis and will keep his supermarket job – meaning a 43-hour work week in total.

4.3 million Americans quit their jobs in August, a new record – The Independent