The furlough scheme came to an end today after 19 months – though uncertainty remains for almost a million people who were still using it.

At its peak a third of all employees were being paid to stay at home under the scheme and forecasters, including the Bank of England, are warning of a rise in unemployment as it ends.

Chief Secretary to the Treasury Simon Clarke said the huge bailout – which has cost the taxpayer more than £68billion – ‘has to end at some point’ as he played down the risk of a deluge of unemployment, while insisting there is ‘support’ and people should seek ‘new opportunities’.

However, experts have warned that around a million could still be reliant on the handouts and some workers and employers have shared their fears as it comes to an end.

Travel agent Jasmin Waite, who has been on furlough since last March, said: ‘It’s really stressful. The end of furlough is a worry because I can’t do my actual job. 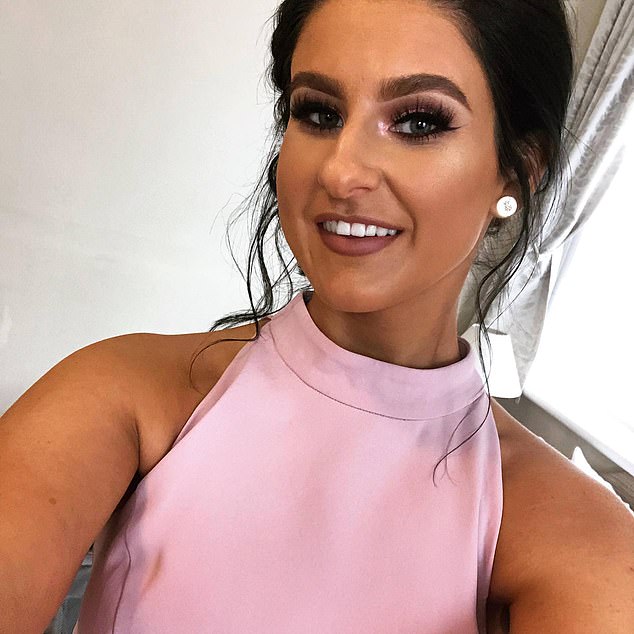 Travel agent Jasmin Waite, who has been on furlough since last March says coming off the scheme is ‘really stressful’ 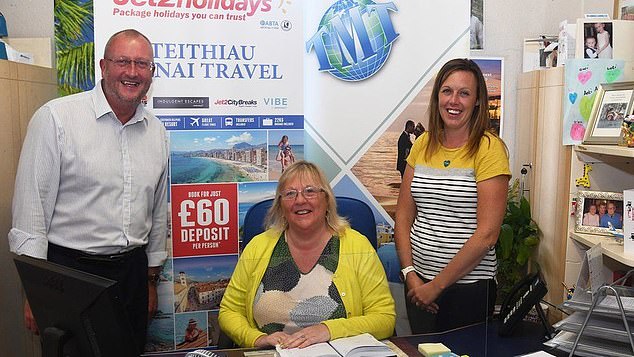 Ann Jones (centre) of Menai Travel in Caernarfon, North Wales, said today she fears losing her staff as furlough comes to an end

‘I feel forgotten about. At the start Rishi said furlough wouldn’t end until it’s over – but the pandemic isn’t really over is it? Yet furlough is. I don’t think they realise that when it ends all these people are going to be made redundant, because they will.’

The owner of a travel agency said she is cashing in her pension so she can keep her staff of three now that furlough has ended.

Ann Jones of Menai Travel in Caernarfon, North Wales, said today: ‘I don’t want to lose my staff, they’re like family and help run the business.’

She believes the furlough scheme should have continued and said she had made little revenue in the past two years.

‘It’s not an easy life being in the travel agency,’ she added, claiming on Radio Wales that the government had helped airlines but not small high-street travel agents.

Up to a tenth of jobs in Crawley could be on the line as the furlough scheme ends.

More than 5,000 employments were on furlough in the town as of the end of July, according to the latest stats.

That is roughly equivalent to 10 per cent of jobs in the area.

Although some are expected to have come off furlough over the past two months, the Sussex town – home to Gatwick Airport – is braced for a spike in unemployment.

Crawley is already in the top 10 places with the highest share of people claiming unemployment related benefits.

It has also seen the largest increase in the claimant count since March, with 5.5 per cent increase in dole handouts.

Unsurprisingly, transportation and Storage was the sector most affected, with 1,990 employees on furlough.

Speaking on a visit to a factory in South Milford, North Yorkshire, the Chancellor said ‘everyone is now back at work’, and that for others the Government has a plan for jobs.

Mr Sunak said: ‘I’m so proud of what [furlough] has achieved. It has protected millions of people’s livelihoods at a difficult time.

‘But I’m also really proud of everyone who has shown such resilience over the last year-and-a-half to get through this. Everyone is now back at work, and that’s a fantastic thing.

‘But I also want people to know that we’re not done supporting people even though the furlough scheme ends today. We have a plan for jobs that is focused on giving people the skills and the opportunities they need to find fantastic work and that’s what we’re now focused on delivering.’

He added: ‘I feel confident about the future’.

He said: ‘There were things that we did during the crisis to help people get through the worst part of coronavirus and I think like furlough ending, the UC (Universal Credit) uplift, it’s natural that those things will come to an end.

‘But we’re not done supporting people. Our plan for jobs is literally throwing the kitchen sink at helping people get the skills they need and find new opportunities.’

He added: ‘But we also announced today a half-a-billion pounds programme to provide support to people, to help them get through the winter. We appreciate that the prices of some things have gone up rapidly.

‘And the half-a-billion pounds will help three or four million of our most vulnerable families with £100 or £150 over the winter period. And I know that will make a difference to people at what is a difficult time.’

Meanwhile, Mark Andrew, the director of Animal Aircare, which helps pets travel overseas via Gatwick Airport, said some of his staff may be made redundant if business does not improve.

He said he has not yet had to lay off staff but says that is ‘purely down to furlough’.

He told the BBC: ‘Furlough ending means there’s a real question mark for our business. We’re still waiting for Gatwick to pick up. It seems the airline industry is not buoyant enough yet,’

The firm has not yet had to lay off staff, which Mr Andrew said was ‘purely down to furlough’.

In a round of interviews this morning, Mr Clarke said that job losses were ‘part of the process’ of recovery from the pandemic.

‘Obviously there will be a variety of outcomes, I don’t have an estimate with me today. There will be some job losses,’ he told Sky News.

‘Furlough has protected 11.6million jobs in total … at some point you have to end these emergency measures.

‘People’s jobs will be created just as some have very sadly been lost, that is part of the process of ending this crisis and going back to normal.’

Mr Clarke said: ‘There is a lot of opportunity out there for people now. There’s never an easy moment to end these measures.

‘They’ve been hugely important but it is also time to recognise that we are now, thankfully, out of the teeth of this pandemic … and we’re in a situation where normal opportunity is back out there for people to embrace.’

He added there would be a ‘range’ of options for those who would find themselves without work and that the unemployment rate had fallen seven months in a row.

Ministers admit jobs WILL be lost as furlough closes

Ministers have admitted jobs will be lost as the Government’s furlough scheme finally ends today after 19 months.

Chief Secretary to the Treasury Simon Clarke said the huge bailout – which has cost the taxpayer more than £68billion – ‘has to end at some point’.

And he played down the risk of a deluge of unemployment, insisting there is ‘support’ and people should seek ‘new opportunities’.

The latest figures show that as of July 1.6million jobs were being propped up by furlough, which has been running since March last year. Experts have warned that around a million could still be reliant on the handouts.

At its peak a third of all employees were being paid to stay at home in an unprecedented government move.

‘We never said we could protect every job … I think we need to be totally honest about this, the Covid pandemic has taken a toll on our economy, it’s changed some things,’ he said.

‘My message to people would be there are these opportunities there.’

Furlough numbers dipped by 340,000 by the end of July – the first month that employers had to pay 10 per cent of the salaries.

But experts have warned that only a ‘trickle’ are being taken off furlough and a million could still be reliant on the bailout.

HM Revenue & Customs figures showed 121,600 people between the ages of 18 and 34 were taken off the furlough scheme in June and July.

Furlough levels remained the higher in London on July 31 than in other parts of the country, especially for men.

Rishi Sunak today unveiled a £500million ‘household support fund’ as ministers scramble to head off a backlash over the end of furlough and the universal credit uplift.

The Chancellor said the funding would provide a ‘lifeline’ as the country faces a cost of living crisis over the winter, with supply chain chaos sending inflation and energy bills into overdrive.

Councils will be given money to distribute to struggling families, so they can afford ‘essentials’ such as heating, food and clothes over the coming months.

But the initiative was immediate slammed by Labour as an ‘inadequate sticking plaster’ designed to give the Tories cover as they kick off their party conference this weekend.

Concerns have been raised about the number of workers over the age of 50 who are still furloughed.

More than 540,000 people in the age group were on furlough at the end of July, accounting for 35 per cent of the total, according to research.

Rest Less, which offers help and advice for older people, said the pandemic had ‘devastated’ the job market for older workers over the past two years.

Founder Stuart Lewis said the full impact might still to be felt, adding: ‘With more than half a million people aged 50 or older still on furlough at the last count, we may well see hundreds of thousands of hardworking, experienced older workers enter redundancy and, ultimately, find themselves looking for a new job in the run-up to Christmas.

‘The jobs market is polarised at the moment. On the one hand, we have record job vacancies and companies struggling to hire talent in key areas, for example HGV drivers and healthcare.

‘On the other side, unemployment levels across many age groups have yet to recover and we are seeing huge falls in economic activity amongst midlifers.

‘Much more can be done to help bridge these gaps through intensive retraining and accelerated assessment programmes.’

Rest Less said its research suggested long-term trends of employment growth among the over-50s has been reversed over the past two years. 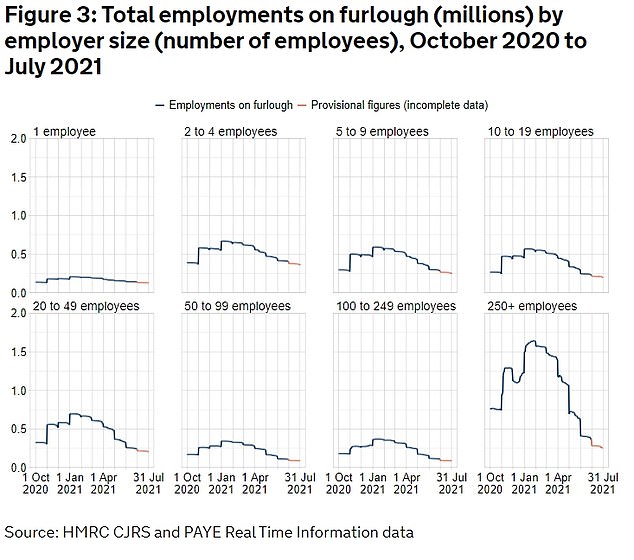