A judge in England has ruled that an Amazon Ring doorbell’s functions broke the Data Protection Act after a neighbour dispute, over claims of a gang of armed robbers trying to steal an Audi, ended up in court.

Dr Mary Fairhurst took her neighbour Jon Woodard to court after alleging that his mass of CCTV cameras, including an Amazon Ring doorbell camera, amounted to harassment, a nuisance and a breach of the Data Protection Act (DPA) 2018*.

The case was sparked by audio-visual technician Woodard installing yet another camera on a neighbour’s wall after falsely claiming an “armed criminal gang” tried to steal his car – putting a communal car park and its access road under full surveillance. Following lots of disagreements by his neighbours and a shouting match which left Fairhurst feeling so unsafe that she moved out of her home on Thame’s Cromwell Avenue, the case ended up at Oxford County Court. The judgment does not set a binding legal precedent: High Court and Court of Appeal rulings do that, while county courts merely apply precedents set by the senior courts. Nonetheless, the case is bound to be cited in domestic CCTV disputes for years to come.

Video OK but not audio

Ruling in Fairhurst’s favour, Her Honour Judge Melissa Clarke said that while Woodard’s rights to film his doorstep were stronger than his neighbour’s right to walk around free from CCTV surveillance, Woodard couldn’t lawfully record audio from the camera, which was sensitive enough to pick up conversations more than 40 feet away:

“A great deal of the purpose could be achieved without audio at all,” added the judge.

Cromwell Avenue, Thame. The car park and its access road can be clearly seen behind the houses in question. Bing Maps image

Fairhurst had objected to Woodard’s growing army of cameras, spread across his own back garden, a neighbour’s property and on his shed, aimed at a communal car park behind their homes in Thame, Oxfordshire. After Woodard offered her a tour of his home at 87 Cromwell Avenue during building works in 2018, Fairhurst spotted the shed-mounted camera and was “alarmed and appalled” by it, she told the court.

“In her witness statement she described that the Defendant showed her how he received alerts from the camera on his mobile phone or smartwatch and showed her a clip of a car moving in and out of a parking space on his smartwatch. She said in oral evidence that she felt he was showing her because he thought she would be impressed by the technology,” said the judgment (PDF, 49 pages)

No armed gang – but too much CCTV

Matters came to a head in April 2019 when three men (who were not armed) tried to steal Woodard’s car from the car park, also stealing the camera from his shed. Alarmed by what it broadcast to him before being torn from its mounting, Woodard told his neighbours that an armed gang of masked robbers had entered the car park – and as well as replacing the shed camera, he installed a new device on the wall of a house beside the access road.

The gang wasn’t armed. Neither was Woodard telling the truth when he reassured his neighbours that the new camera was a “dummy”. When Fairhurst’s partner Dr Ruggero Franich took a close look at the camera lens, Woodard immediately phoned her claiming the homeowner whose wall he installed it on was “in a panic” because of “a strange man” outside her house.

The following morning Fairhurst spoke to the homeowner, who “said she knew nothing about any such activity the previous evening” and “had not been in touch with” Woodard. 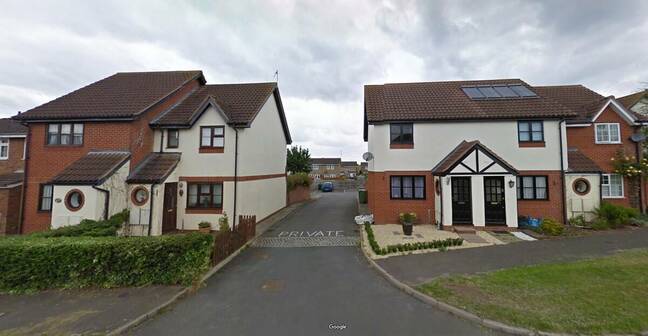 Cromwell Avenue, Thame, showing the entrance to the car park. Fairhurst lived at number 83 to the left of the access road while Woodard lives at 87, on the right-hand side of the house to the right. Google Street View

After a shouting match caused Fairhurst to flee from her home, the CCTV fanatic later called the police on Franich, supplying cops camera imagery of him as he parked his car in Fairhurst’s driveway and collected her post.

HHJ Clarke went on to describe Woodard as “stuck in a web of his own lies” as he tried to explain all of this in court, adding later that she found his evidence “entirely unbelievable” unless supported by others.

Ring spokeswoman Claudia Fellerman told The Register: “We strongly encourage our customers to respect their neighbours’ privacy and comply with any applicable laws when using their Ring device. We’ve put features in place across all our devices to ensure privacy, security, and user control remain front and centre – including customisable Privacy Zones to block out ‘off-limit’ areas, Motion Zones to control the areas customers want their Ring device to detect motion and Audio Toggle to turn audio on and off.”

Woodard, of 87 Cromwell Avenue, Thame, was found to have breached the Data Protection Act 2018 and harassed Fairhurst. He gave his side of the story in an interview with the Daily Mail.

* The EU-derived GDPR is kept within Britain’s domestic law as the UK GDPR, which rests alonside a revised form of the DPA 2018 ®

Morrisons in 11th-hour pension talks with bidder Fortress – The Times