Perhaps you’ve always liked the plug-in hybrid idea but so far they’ve made little sense for you as an individual.

You’re certainly not alone: with any PHEV, it’s possible to save magnificently on fuel costs, but only if your driving habits fit a very specific pattern of behaviour. If they don’t, the meagre electric range of most PHEVs starts to feel pretty nominal and the heavy battery pack becomes an ornament that drags down the efficiency of an engine forced to work harder than necessary. All pretty contradictory.

However, with this new Mercedes C300e, the technology is coming of age. The plug-in C300e has an official electric range of 62 miles, almost double that of the outgoing version. By comparison, the otherwise excellent BMW 330e musters only 37 miles and there will be no PHEV Audi A4 until at least 2023. So if you want a premium saloon that you can use as freely as an EV during the week but has proper ICE legs for longer journeys, the C300e is your most promising option, and the estate version will only enhance the breadth of its appeal.

The layout is familiar, with charge for the electric motor supplied by a 25.4kWh battery pack beneath the stepless boot f loor. The pack can be replenished fully in half an hour at charging speeds of up to 55kW and the 127bhp motor it drives is integrated into the nine-speed automatic transmission.

Four-wheel drive is likely to follow, but at first the C300e will be rear driven, with its motor assisting a 201bhp 2.0-litre four-cylinder petrol engine that can propel the car alone. Total system output is 8bhp down on before but still generous at 308bhp. 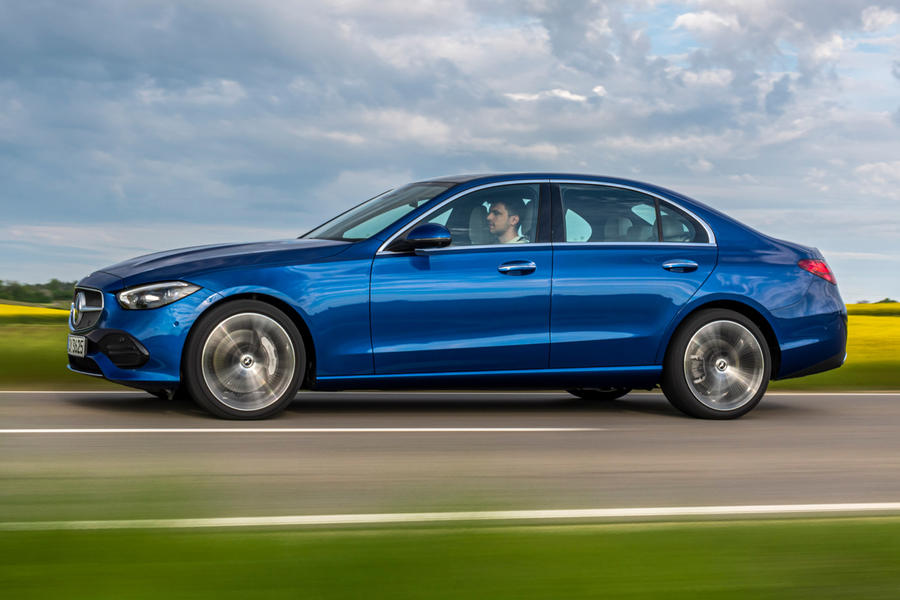 The C300e never feels that quick, most likely because it’s quite heavy. There’s no official kerb weight yet but we expect it to be nudging 1850kg.

This car was never about going fast, though. With its digitised cockpit, sweeping design and plush upholstery, the latest C-Class really wants to be an S-Class impersonator at half the price. The C300e pulls off this trick well, blending material comfort and with fine manners from the powertrain and chassis.

If you’re going straight from all-electric trundling to needing maximum driveline power, it can take a moment for the nasal-sounding engine to wake up and the gearbox to find the right ratio, but mostly the C300e glides about with minimal disturbance to its flow, leaning heavily on its healthy electric capability and feeding in combustion power as you need it. The set-up in the 330e is crisper and the engine happier to rev out, but I’ll be surprised if it’s as silver-tongued as that of the Mercedes-Benz when we test them back to back. The C300e has an oleaginous slickness to it.