At one centimetre per minute, this thing moves at a snail’s pace. It is one hell of a snail, however.

More than 500ft long and the width of a house, this is the 2,000-ton creature that is currently eating its way beneath some of our prettiest countryside to make space for the world’s most expensive railway.

And this monster will be chewing away, around the clock, for the next three years.

At ten miles long, the Chilterns tunnel for the HS2 London-Birmingham rail link is not only longer than most sections of the London Underground — at 30ft across, it is considerably wider than any rival, including the Channel Tunnel.

That’s because it will also be the fastest stretch of rail tunnel in the land, and speed determines the width of a tunnel. At 200mph, the trains would simply suck the air out of anything narrower. 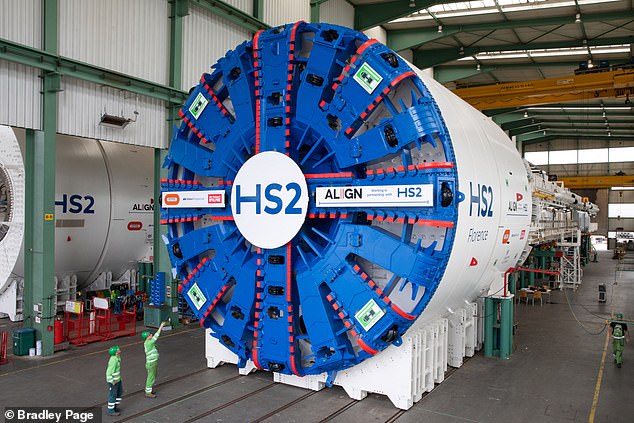 More than 500ft long and the width of a house, this is the 2,000-ton creature that is currently eating its way beneath some of our prettiest countryside to make space for the world’s most expensive railway

What’s more, unlike most tunnels, it has a perfect telephone and internet signal.

I know that because I am down here to meet the drilling team as they prepare to celebrate the first milestone — literally. At some point today or tomorrow, this gargantuan earth-chewer — called Florence — will reach the one-mile mark.

What’s more, ‘she’ has an identical twin named Cecilia which is a few weeks behind and pursuing a route, in parallel, through the chalky-flinty substructure of the Chiltern Hills.

For this is not actually one tunnel but two — one bore for northbound traffic, and one for trains going the other way. So it’s really 20 miles of tunnel.

Just a short walk from this awesome engineering exercise, another one is also under way. The first piles are now going into the ground to erect what will be Britain’s longest railway bridge, a two-mile viaduct feeding the high-speed trains in and out of the tunnel and over the Colne Valley.

Not only is the HS2 project the costliest bit of infrastructure Britain has ever undertaken, it is also one of the most unpopular. Numerous action groups are still going strong after years of protest. They point angrily at both the bill (now estimated at between £98 billion and £106 billion for the whole line) and the effect on the countryside. 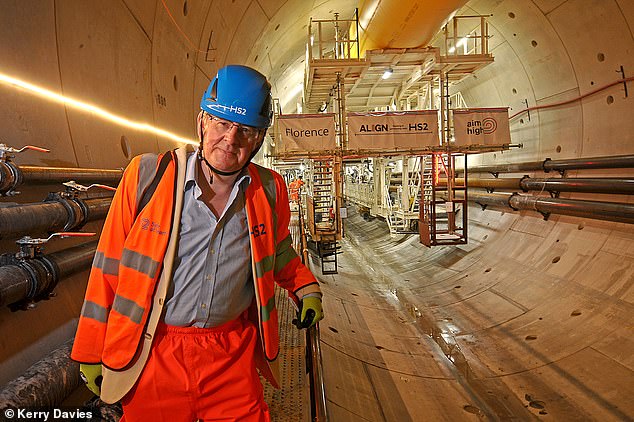 At ten miles long, the Chilterns tunnel for the HS2 London-Birmingham rail link is not only longer than most sections of the London Underground — at 30ft across, it is considerably wider than any rival, including the Channel Tunnel. Robert Hardman is pictured inside the HS2 tunnel

Just this year, the project cost the Government what should have been a slam-dunk by-election win, when the Liberal Democrats snatched the true-blue Buckinghamshire seat of Amersham and Chesham. HS2 runs right through the middle of the constituency and the locals are furious that they must endure a decade of major traffic disruption to build a railway which will bring no direct benefits to the area.

However, once you enter this extraordinary building site, one thing is abundantly clear: there is now no going back on HS2.

The 140-mile line from London to Birmingham — which currently accounts for £44.6 billion of the total — is broken in to four sections with different builders for each.

The shortest section, known as C1, is the 14-mile leg running from the London suburbs up through the Chilterns towards the late Roald Dahl’s home village of Great Missenden.

Run by a multi-national consortium called Align, this is also the most complex stretch as it includes the longest tunnel and longest bridge on the entire line.

Yet, until you get on this £1.6 billion site, you have no idea that something the size of an international airport has suddenly sprung up alongside the M25 near Denham, Buckinghamshire.

The engineers have done a clever job of hiding the sheer bewildering scale of it from public view. You really do need a map.

There is not only all the machinery which goes with digging 20 miles of tunnel. The contractors have also built a giant factory the size of an Amazon warehouse right here to make the components.

For this entire project actually combines two operations: digging and tiling. Each time the machine has gobbled up another couple of yards of the Chilterns it has to shore up the sides of the tunnel with huge wall tiles.

For each tunnel is really just a ten-mile tube of interlocking concrete rings. Every ring is roughly 6 ft long, 30 ft wide and made up of seven ‘segments’. Each computer-designed, oven-cooked segment looks like a massive grey tortilla chip, weighs nine tons and will be slotted into place by a robot. And there will need to be 112,000 of them in total.

Instead of making these elsewhere and then shifting a million tons of concrete by road, a decision was taken to build a factory on the spot. What’s more, the contractors have just built another whopper alongside it to produce all the building blocks for the viaduct.

Alongside the factories are huge hangars for storing all the raw materials, with enormous diggers shovelling sand and cement into a giant hopper to mix the fibre-reinforced concrete. 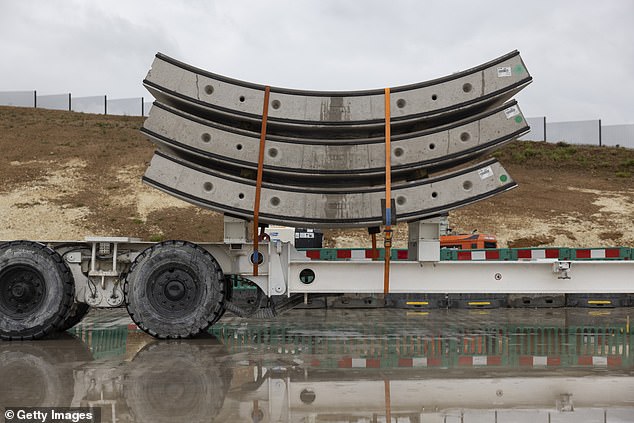 Each tunnel is really just a ten-mile tube of interlocking concrete rings. Every ring is roughly 6 ft long, 30 ft wide and made up of seven ‘segments’

A young Tonka toy fan would happily spend all day watching this open-mouthed.

Nearby is another huge plant for processing the 3 million cubic metres of soil coming out of the ground as the machines eat through the hills. This is being laid over nearby grassland. It’s enough to build a whole new Chiltern hill.

Needless to say, I have to undergo some thorough health and safety briefings before I am allowed anywhere near any of this stuff.

The tunnellers call themselves miners and observe standard mining protocols, including a numbered brass disc for everyone going down the hole. We all have to carry an emergency breathing kit strapped to our shoulder.

It is now such a long trip from the office to the coalface — or the chalkface in this case — that we hitch a ride on one of the maintenance waggons. These look like a cross between a Thunderbirds vehicle and a tug that drags aircraft around airports.

Every few hours, one of these machines will lug another cargo of concrete segments up to the frontline for slotting into a newly dug stretch of tunnel. And with every fresh yard of tunnel, the engineers have to build another yard of ventilation duct, of cables, of soil extraction pipe, of concrete floor and so on.

So a great deal of kit has to keep coming in, alongside the soil heading the other way.

While daylight recedes in the distance, I can see a gentle curve to the tunnel. The drilling machine looms far away. It is more like a submarine on wheels.

You approach it from the rear, where it carries a mass of tanks and tubes. This is the grout-batching machine which makes the glue for the wall tiles. You edge past crates carrying all the new cables and pipes and reach what tunnel chief Shannon O’Keefe calls ‘the intestines’.

This houses the various power plants, fire-proof refuge shelters and, crucially, the small canteen for each 17-man shift.

This lot are boring for Britain but they are an international bunch. And they are not all men. The duty engineer, Karine, 26, is one of several women on the project.

‘I love all the innovation,’ she says, explaining that this operation has plenty of new tunnelling gizmos.

I ask how this compares to the Channel Tunnel and she laughs. ‘I wasn’t born when they built that. Things have changed quite a bit.’

Among the miners on this shift are Jack Bonner Senior and Jack Bonner Junior, a father and son from Donegal. Jack Senior worked on the Channel Tunnel back in the 1980s. What does he regard as the main difference?

‘Well, they certainly didn’t have a canteen down there,’ he laughs.

Further up in the ‘heart and lungs’ of the machine — the control room — I meet another Irish-born veteran of the Channel Tunnel. Brendan Carney’s official title is ‘pilot’ — which must make for amusing party chat when he tells people his top speed. He is the man who drives this thing.

‘That’s my compass,’ he says, pointing to a row of screens that keep him on track to a fraction of a millimetre.

Because I have arrived during a brief maintenance break, the actual drill bit — known as the ‘shield’ — is not rotating. Not that I’d be able to see it anyway as it is clamped to the chalkface.

Brisbane-born Shannon, 36, explains that it is a huge disc armed with three different sorts of tungsten carbine teeth: ‘rippers’, ‘grippers’ and ‘rolling wheels’. The first two are self-explanatory while the latter fracture and shatter any rocks which get in the way.

While the ‘shield’ does the grinding at the front, 14 hydraulic rams press themselves against the concrete ring sections to push the whole machine forwards. And thus, Florence and Cecilia heave their way forth beneath Buckinghamshire.

Shannon plans all the tunnelling three months in advance. His next big moment will come when the horizontal tunnelling operation links up with the vertical dig to drop a giant ventilation shaft down below Chalfont St Peter. By then, the tunnel will be nearly 300 ft below the surface.

It’s a curious world down here. It’s always night, the temperature never changes — nor does the view — and it goes so slowly that nothing much seems to happen. But Shannon loves it. ‘You’re doing and seeing things which no one else will ever see,’ he says.

His one sadness, he reflects, is that when it’s all finished and the trains are running, people will barely notice his handiwork.

‘It’s ten miles long,’ he says. ‘But people will be in and then out the other side in three minutes.’