Arianespace and Starsem have launched 34 more internet communication satellites of the OneWeb constellation to a low Earth orbit (LEO). The launch occurred at 18:07:19 UTC (14:07:19 EDT) on Tuesday, September 14 from Site 31/6 at the Baikonur Cosmodrome in Kazakhstan on a Soyuz 2.1b/Fregat rocket.

OneWeb satellites 289 to 322 were deployed into an initial 450 km orbit with an inclination of 84.7 degrees and bring the total number of OneWeb satellites in orbit to nearly 50% of the initial 648 satellite constellation.

The 34 OneWeb satellites on today’s mission carry a total launch mass of 5,510 kg.

The OneWeb satellite constellation is one of the several planned internet satellite platforms along with others such as Project Kuiper (produced by Kuiper Systems, an Amazon subsidiary) and SpaceX’s Starlink. The initial plan for OneWeb is to have 600 satellites in orbit for global coverage and 48 spares in case of failures.

A 600 satellite initial constellation could provide up to 50 MB/s of internet speed to nearly anywhere on the globe.

The final operational orbit for the OneWeb constellation, after the satellites raise their orbits after launch, is 1,200 km spread across 18 orbital planes with 36 satellites per plane.

In orbit, the OneWeb constellation uses a technique called progressive pitch, which helps avoid the Ku-band signals from geostationary satellites.

The satellites for Tuesday’s mission were produced by OneWeb in Florida, with help from Airbus Defence and Space. From there, they were shipped to Kazakhstan and handed over to Arianespace (the European launch services contractor for this mission alongside Starsem, which serves the same role but for the Russian side of operations) for the final integration and launch operations.

Each satellite has an individual mass of 147.5 kg and is equipped with an antenna that supports Ku-band for communications, which can work in the 12-18 GHz electromagnetic spectrum.

A new batch of 34 @OneWeb satellites was delivered to Baikonur

The specialists transported the satellites to the cosmodrome, where the joint technical team started preparing the satellites for the upcoming launch.

🚀 The launch is scheduled for September 14, 2021 pic.twitter.com/HKTO8IpUCJ

A week before liftoff, the 34 payloads were transferred as an upper composite to the integration facility UCIF-MIK-112. The upper composite contained not only the satellites but also the payload dispenser and the Fregat upper stage already protected by the Soyuz 2.1b’s payload fairing.

The rocket was then rolled out to the launchpad on Saturday, September 11, after a standard readiness review cleared the vehicle and payload. At the pad, Soyuz was taken vertical and connected with the ground service equipment.

The Soyuz 2.1b was developed by Roscosmos and first launched in October 2011 with the Pleiades-HR 1A/SSOT/ELISA mission.

To date, it has launched 65 times, of which 62 have been successful. The last failure happened in November 2017, in which the rocket performed the upper stage burn in the wrong direction.

The final launch countdown started at T-9 hours with a complete system check.

Visualization of a OneWeb satellite in orbit. (Credit: OneWeb)

At T-3 hours 30 minutes, the vehicle was fueled with liquid oxygen and rocket-grade kerosene, called RP-1. This is used on all of the stages besides the Fregat upper stage — which runs on the hypergolic mixture of unsymmetrical dimethylhydrazine (UDMH) and nitrogen tetroxide (N204).

At T-35 minutes, the launchpad servicing platforms, which surround the Soyuz rocket, were lowered to launch position.

At T-16 seconds, the four RD-107A engines on the four boosters and the RD-108A engine on the center core ignited. The four side boosters each produced 839 kN of liftoff thrust with an isp of 263 seconds at sea level. The center core brought another 792 kN, increasing the liftoff thrust of the 46.3-meter high stack to 4,148 kN.

Just before the two-minute mark into the flight, the four side boosters separated in the iconic visual pattern that forms a cross-like shape around the rocket.

Known as the “Korolev Cross,” it is named after Russian rocket designer Sergei Korolev, who worked on rockets during the space race. 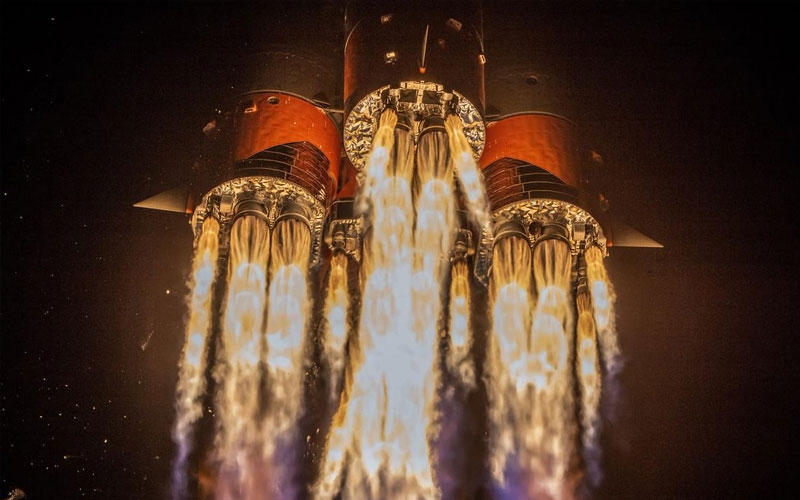 The vernier engines on the base of a 2.1 rocket gimbal to move the rocket onto the proper orientation for launch. (Credit: Roscosmos)

The core itself continued to burn for another 2 minutes 48 seconds. During the final few seconds of core stage burn, the Soyuz’s Blok-I upper stage ignited its engine while still attached to the core stage.

This so-called “hot-fire” is a normal part of Soyuz launches.

The Blok-I Soyuz stage is powered by a single RD-0124 engine, which was one of the upgrades introduced to the rocket in the 2.1b line.

With an isp of 359 seconds, this greatly improves the efficiency of the upper stage and helps to increase the payload capability of the Soyuz-2.1 rocket family.

After Blok-I shutdown, the Fregat stage ignited to bring the orbit apogee to its correct height of 450 km. Fregat then coasted to apogee and then reignited its engine to circularize the orbit for spacecraft separation.

The OneWeb satellites then deployed in stages, with the first stage only releasing two. After that, every release involved four satellites.

(Lead image: The Soyuz 2.1b launched on the OneWeb 10 mission. Credit: Roscosos)