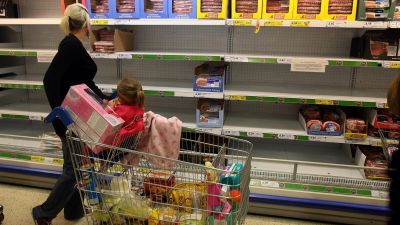 Tesco’s UK distribution and fulfilment director said his concern is that ‘pictures of empty shelves will get 10 times worse by Christmas’, ITV News Business and Economics Editor Joel Hills reports

Tesco has told the government it is concerned about panic buying in the run-up to Christmas unless urgent action is taken to address a national shortage of HGV drivers.

In a meeting organised by the Cabinet Office last Thursday, the UK’s largest supermarket revealed it has a shortfall of 800 lorry drivers and asked the government to temporarily make it easier to bring in workers from abroad.

Tesco has been offering new recruits bonuses of £1,000 since July but Andrew Woolfenden, the supermarket’s UK distribution and fulfilment director, said Tesco has only managed to attract as many drivers as it has lost to rival businesses over the summer.

Mr Woolfenden said the problem was industry-wide and described attempts by companies to recruit from the same, limited pool of drivers as like “moving deckchairs around”.

Tesco is worried the situation will deteriorate significantly in the weeks leading up to the festive period.

“Our concern is that the pictures of empty shelves will get ten times worse by Christmas and then we’ll get panic-buying,” Mr Woolfenden said.

In recent weeks, gaps on the shelves have become obvious but there has not been a repeat of the frenzied stockpiling that supermarkets experienced in March last year.

Back then, there wasn’t a problem with the supply of goods. Retailers simply struggled to replenish the shelves fast enough.

Today, there there are genuine shortages and retailers are anxious that a sudden surge in demand would make restocking even harder than it currently is.

Even mighty Amazon is finding it difficult to attract the HGV drivers it needs to deliver in the run up to Christmas.

The online giant, which employs drivers via third party contractors, has raised hourly pay but is struggling to fill vacancies in South Yorkshire and South West England in particular.

Katherine Mercer, Amazon’s Public Policy Manager for the UK and Ireland, told the meeting that recruitment efforts were “back at square one” and that Christmas will be “a real challenge”.

HGV driving has historically struggled to attract new recruits. The job has a reputation for long, anti-social hours, low pay and poor working conditions, but this is a golden moment to be holding a HGV licence.

The evidence suggests that drivers realise they are in demand, often switching between employers to secure the highest levels of pay.

McDonald’s told the government that it has lost drivers to Amazon and has found it hard to replace them.

Beth Hart, the burger chain’s Vice President of Supply Chain, said deliveries had been disrupted and that shortages of ingredients had impacted menus and forced some of its 1300 UK sites to close early.

McDonald’s has responded by scaling back its expansion plans. Last June, the company announced it would open 50 new restaurants and recruit 20,000 new staff in the UK and Ireland.

Retailers have been experiencing delivery problems ever since restrictions began to lift in April and the scarcity of HGV drivers became obvious.

The Road Haulage Association and Logistics UK estimate there is a need of between 75,000 and 100,000 new recruits.

They blame the shortage on a reduction of HGV testing during lockdown, an increase in the number of drivers retiring and EU nationals returning home.

Logistics UK has asked the government to make it easier to bring in drivers from abroad, requesting 10,000 temporary visas until more drivers can be trained in the UK.

Tesco does not think this will be enough.

ONS data suggests that the number of EU nationals employed in the UK as HGV drivers fell by around 13,500 between 2019 and 2021.

The government acknowledges there is a problem and is keen that it is solved using the domestic labour pool – British lorry drivers for British lorries.

The government is promoting apprenticeships and is making changes to accelerate the training process to enable more HGV drivers to qualify.

A taskforce has been setup by the Cabinet Office to address short-term problems in the supply chain. Stephen Barclay, the former Brexit Secretary, is leading it.

The government is resisting calls for temporary visas.

It points out that countries across Europe are experiencing HGV driver shortages and argues that if UK businesses improve pay and conditions then their recruitment problems will ease.

According to Adzuna, an online jobs vacancies database, the average salary for a class 1 HGV Driver has risen by 18% to £37,317 in the last year.

A Tesco spokesperson said: “We have good availability, with deliveries arriving at our stores and distribution centres across the UK every day.

“While the industry-wide shortage of HGV drivers has led to some distribution challenges, we’re working hard to address these and to plan for the months ahead, so that customers can get everything they need.”

A spokesperson for Amazon said: “The festive season is always our busiest time of the year and, as we do every year, we’ll be working to provide the best possible service for our customers.”

A McDonald’s spokesperson said:
“Like most retailers in the UK, we experienced supply chain issues this summer due a complex set of events that have impacted many sectors. One issue that our suppliers have faced has been a shortage of HGV drivers, and we have worked hard to minimise any impact on our customers.”


A government spokesperson said: “We recognise business is facing a range of challenges and we are taking steps to support them, including streamlining the process for new HGV drivers and increasing the number of driving tests. Progress has already being made in testing and hiring, with improving pay, working conditions and diversity.

“We are closely monitoring labour supply and working with sector leaders to understand how we can best ease particular pinch points. Through our Plan for Jobs we’re helping people across the country retrain, build new skills and get back into work.”